An Ego Spanking in the Gunks

(Please excuse any excessive geological ramblings, sometimes can't help myself. I learned geology while learning to climb, so the two are inseparable in my mind. But then again, they're inseparable anyway...) 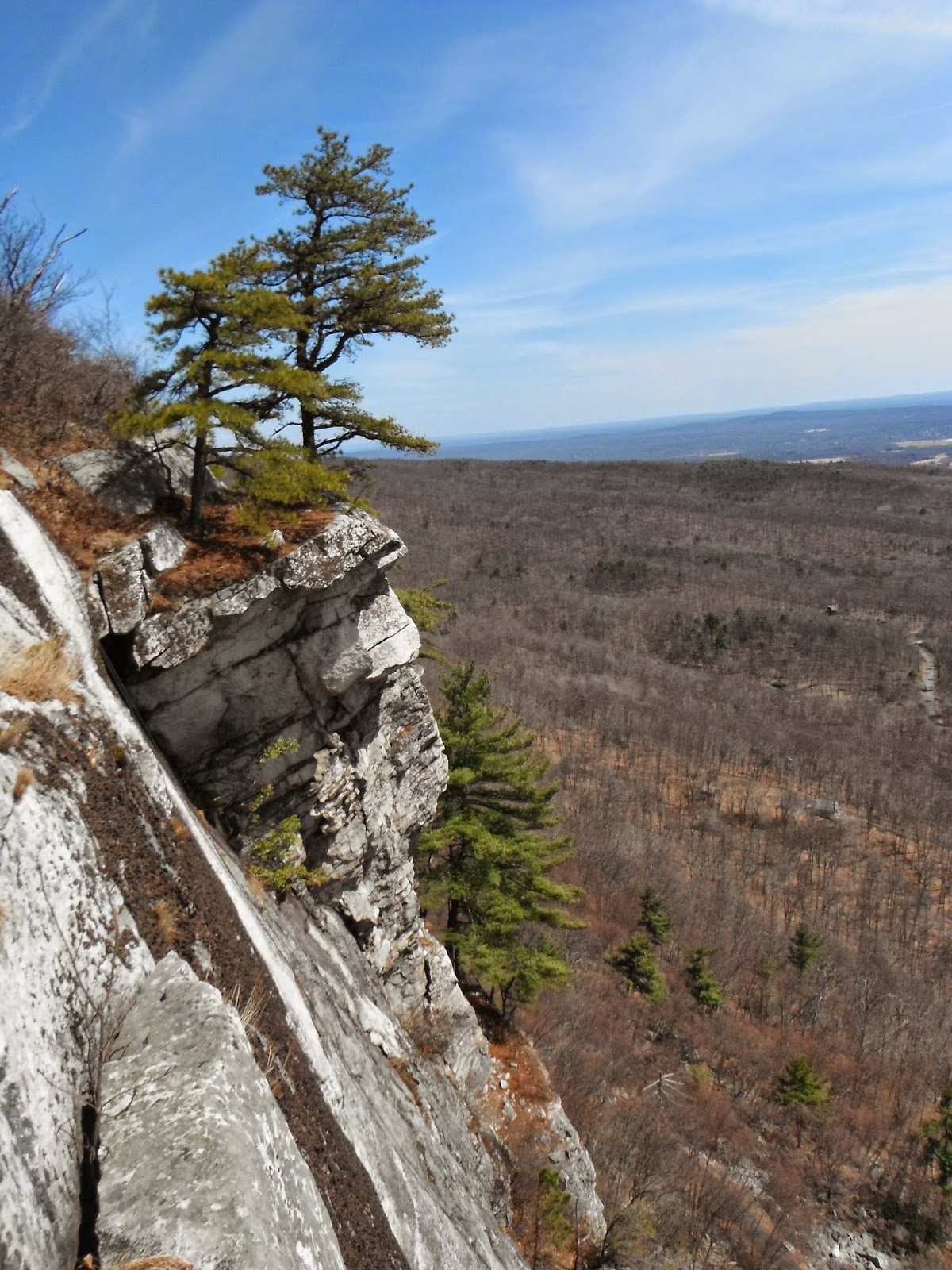 We all need to be taken down a notch, as my mother would say, every once in a while. While I don’t necessarily enjoy it at the time, I definitely need a good ego-spanking now and then, and I received just what I needed this weekend. Spring finally has come to New England and my girlfriend Lilly and I journeyed with our friends Heather and Craig to the Gunks. Presiding above a rolling pastoral landscape just outside the college town of New Paltz NY, a striking cliff-line of gently dipping quartz conglomerate, formally Shawangunk ridge, is one of the premier traditional rock climbing destinations in the northeast. The Gunks is TRADITIONAL in the proper sense; routes rely almost exclusively on natural protection, ball-nuts and tri-cams are still on gear lists, and creativity with placements and good-old boldness are prerequisites for leading anything above (and sometimes including) 5.6. Most notable for a climber from Colorado is the SANDBAG factor: I haven’t gone to a crag with a hit list of 5.6’s and 5.7’s, with a .10b as my “stretch” goal, since my rack consisted of manky DMM cams, bootied nuts, and tied nylon slings and I still paid upperclassmen for beer.

The sandbag factor is fun and good for the soul, and provides some fantastic climbs that are both easy and thrilling, a combination not often found. (*Cough* excellent place to take your aspiring-climber significant other to get them psyched). This is made possible by the unique geology of the cliff: it’s a 70 meter high package of what a geologist would call “thin to medium-bedded” quart conglomerate. It’s basically very well cemented sandstone with pebbles mixed in with the ancient sand (thus a conglomerate), and between “beds” (flat layers) of pebbly sandstone are thin layers of shale, the rock that forms from mud. The result: shale erodes faster than sandstone, so the cliff appears as horizontal bands of bullet-hard conglomerate separated by horizontal cracks that vary from a half-inch to 3 inches, the perfect size for a cam. Also, the whole layer-cake of conglomerate and shale dips away from the cliff, so edges on the cliff tend to not only be flat, but positive. From a climber’s perspective, geology has created bitchin’ good climbing, basically a wall of jugs protected by horizontal placements.

I would describe the Gunks as the antithesis of Indian Creek: rather than plug-and-chug routes that demand pure stamina and physical prowess, successful sending at the Gunks relies more on the dark arts of subtle face climbing, gear trickery, and old-school boldness. It feels quite similar to Eldo, in fact. You can’t bump your cams along a vertical crack, and often you can’t even see placements until you’re staring into them with the wind whistling beneath your shorts. A lot of low-grade routes at the Gunks are just a ton of fun; I don’t know where else I’ve been run-out on overhanging terrain 15 feet above a horizontally-placed green C3 and felt totally at ease while throwing a heel-hook on yet another massive jug. Can’t do that in the South Platte. I could nerd out on the influences of geology on climbing all day, so on to the spanking…

The Gunks is famous for insanely fun and exposed moderate climbs (notably High Exposure, which Craig described as “the funnest 5.6 on the planet”… and I have to agree), but things get pretty serious pretty fast as the grade increases. Lilly and I enjoyed “Snooky’s return,” which starts with exciting moves off the ground protected by RPs (got my fully attention!) and finishes with a rope-stretching run-out up an overhanging jug-fest for a 50+ meter pitch: rated 5.8. The sun at this point was roasting but we were psyched and I hopped on the adjacent climb “Friends and Lovers,” rated 5.9 PG. Tenuous moves off the deck lead to thankfully bomber gear before a quite difficult an devious crux. I had just pulled the move and plugged a 00 C3 into a tiny horizontal pocket while balanced on a warm, greasy smear; I was contemplating the next move and trying to keep my balance, feeling pretty gripped, when ropes came down from above and surprised me quite a bit. Someone was rappelling down, very close.

“Uh, head’s up, I’m down here,” I said, re-chalking my sweaty fingers and giving the C3 a solid wiggle, feeling a little indignant that someone securely on rappel would drop ropes so close to a climber bravely forging ahead in the valiant act of LEADING…

“What are you climbing?” asked a kind older voice. “Oh, that’s a good one, I put that route up years ago.”
My rising balloon of indignation popped and fell, wilted, to the ground. This guy put up the F.A. of this thing in the 70’s! I looked at the C3 again, securely lodged in a ridiculously small pocket. He certainly didn’t have C3s in 1978, and he was probably fiddling tricams and hexes into the larger horizontals, wearing EBs on his feet…suddenly I felt ridiculous in my padded harness bristling with light modern cams and dyneema runners, standing in pinpoint-perfection LaSportiva rock shoes.

Feeling the need to say something else as Ron Sacks hung 10 feet from me with his grey beard and a twinkle in his eye, I said, “uh, pretty exciting route.”

Well now that the route’s venerable author was mere meters away watching some shirtless whippersnapper climb his route 36 years later in sleek asymmetric shoes, I surely wasn’t going to fall, or flail. I grabbed my “man-satchel,” so to speak, and kept climbing. The horizontal cracks on this part of the wall are pretty far apart, so you have to climb a couple body-lengths between pieces. Soon I was at the route’s crux, contemplating a difficult smeary high-step move off small crimps with a green Camalot placed securely in a horizontal crack beneath by feet. I looked down at the cam, the slab below that I really didn’t want to hit, Lilly belaying with a smile on her face and Ron watching steadily. What did he place in there in ’78? A hex? Was it bomber? Can’t mess this one up.

I searched for various options to make the move feel more secure and of course there were no other options, so eventually I stopped farting around and pulled the move, discovered there was no gear to be had, and kept going up into a definite no-fall zone. ‘Jeez, this thing is BOLD’ was my main thought as I finally got more gear in—a green C3 under a wet down-ward facing flake, ugh—and continued up easy but exciting terrain to the anchor. I looked down and Ron was smiling.

Chatting with Ron later, we learned he was there taking his teenage daughter climbing for the first time; they'd just enjoyed a classic 5.5 that scales the whole cliff with plenty of exciting exposure. He quit climbing for 20 years after his amped-up youthful days and was recently getting back into the sport. Meeting him in such ridiculous circumstances—an amped-up youth myself “hopping on” his route for a quick jaunt with modern gear, a route that was surely a serious risk for him to lead in ’78—gave me pause and made me think about the courage of the climbing pioneers who took big risks to climb these walls and discover what’s possible. All winter I’ve been training in the gym, cranking out sets of 5.12 sport climbs and taking huge whingers with abandon in the plastic, padded room. It’s good to remember that all that strength is no substitute for good old-fashioned courage, and leading a “5.9” at the Gunks is plenty exciting. 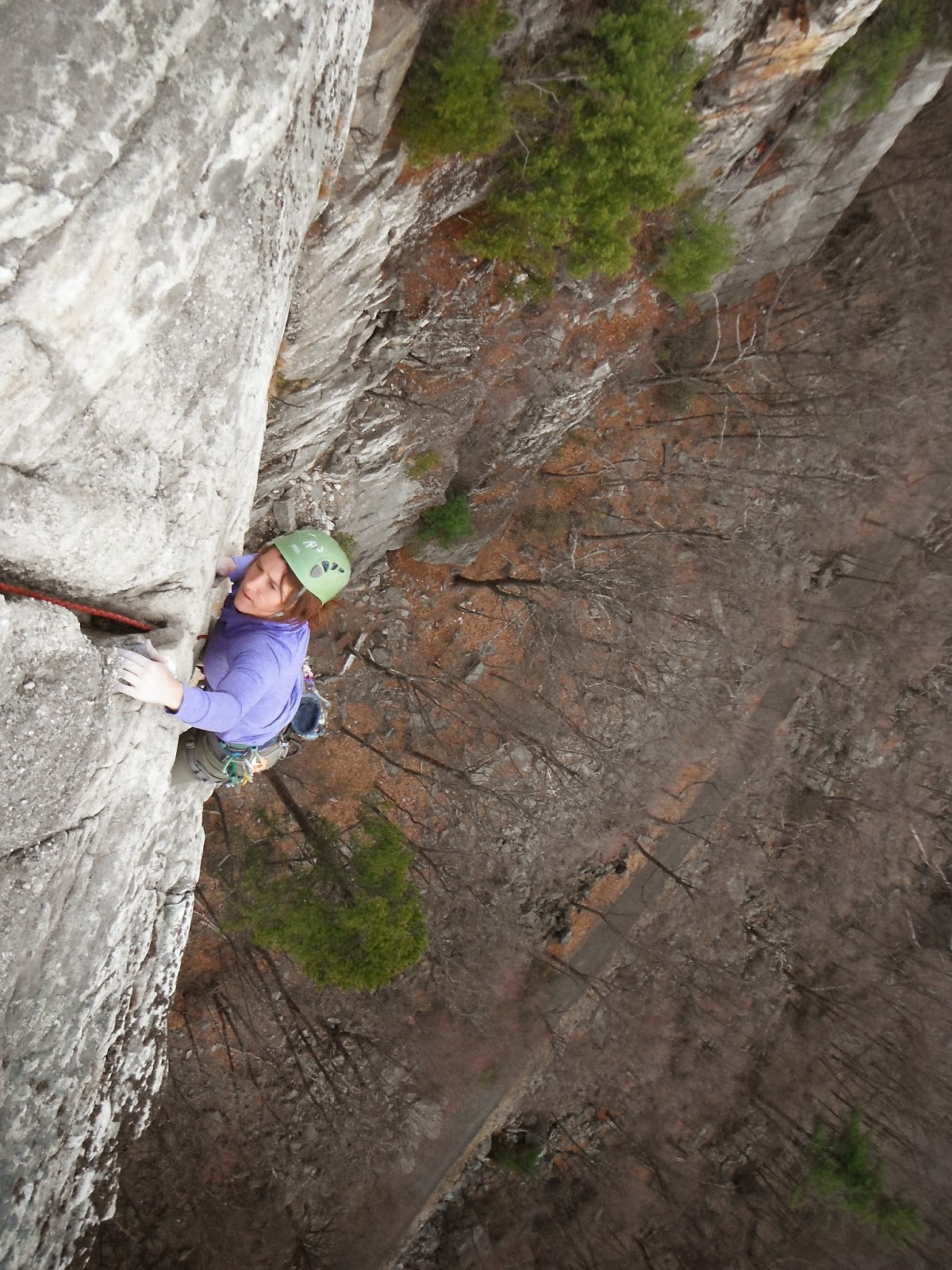 Lilly pulls out of overhanging jug-world on the funnest 5.6 on the planet 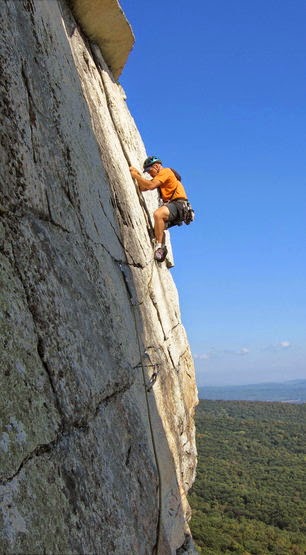 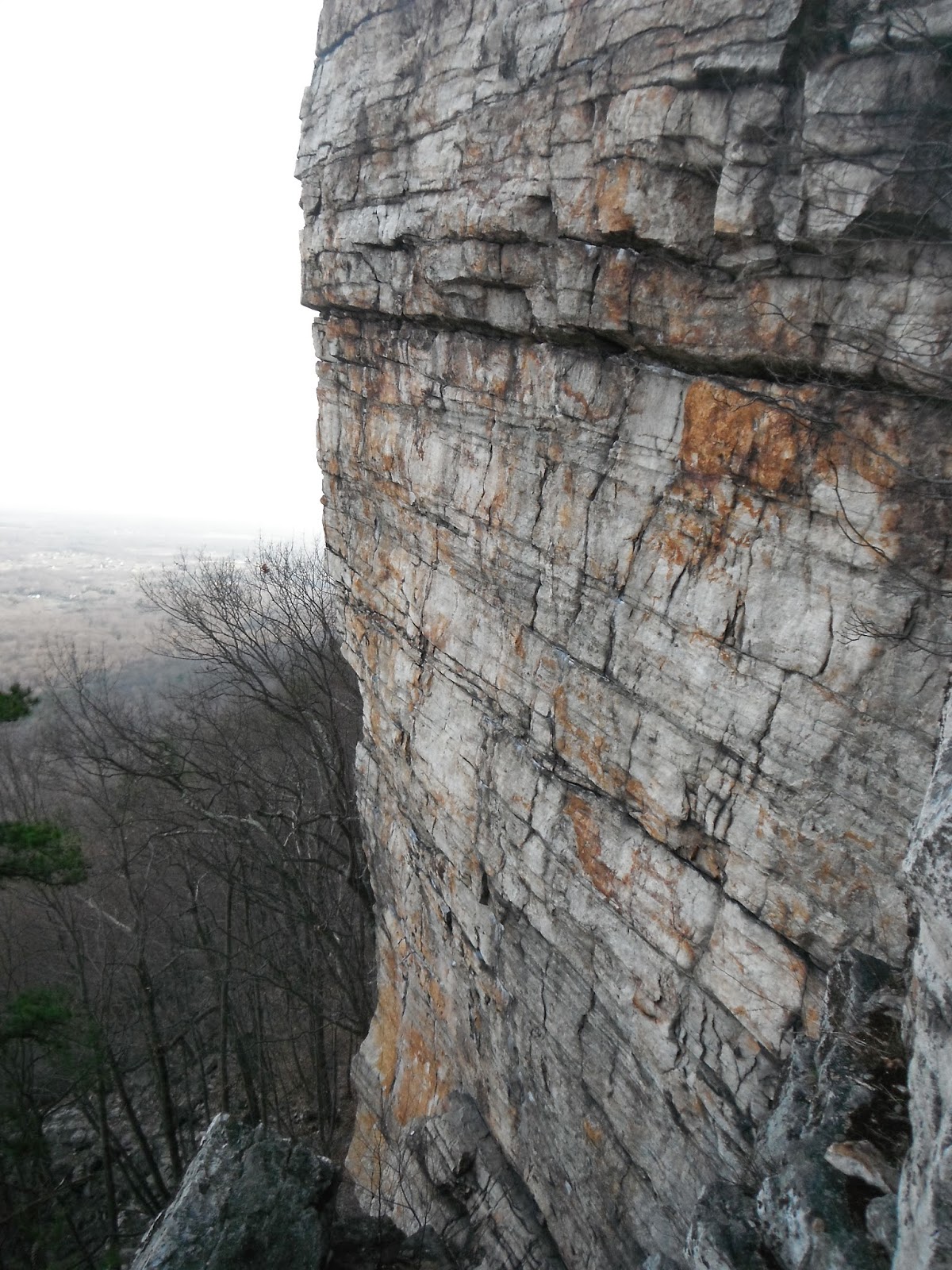 One of the steeper walls, the site of Directississima, 5.10b, which Craig sent in good style 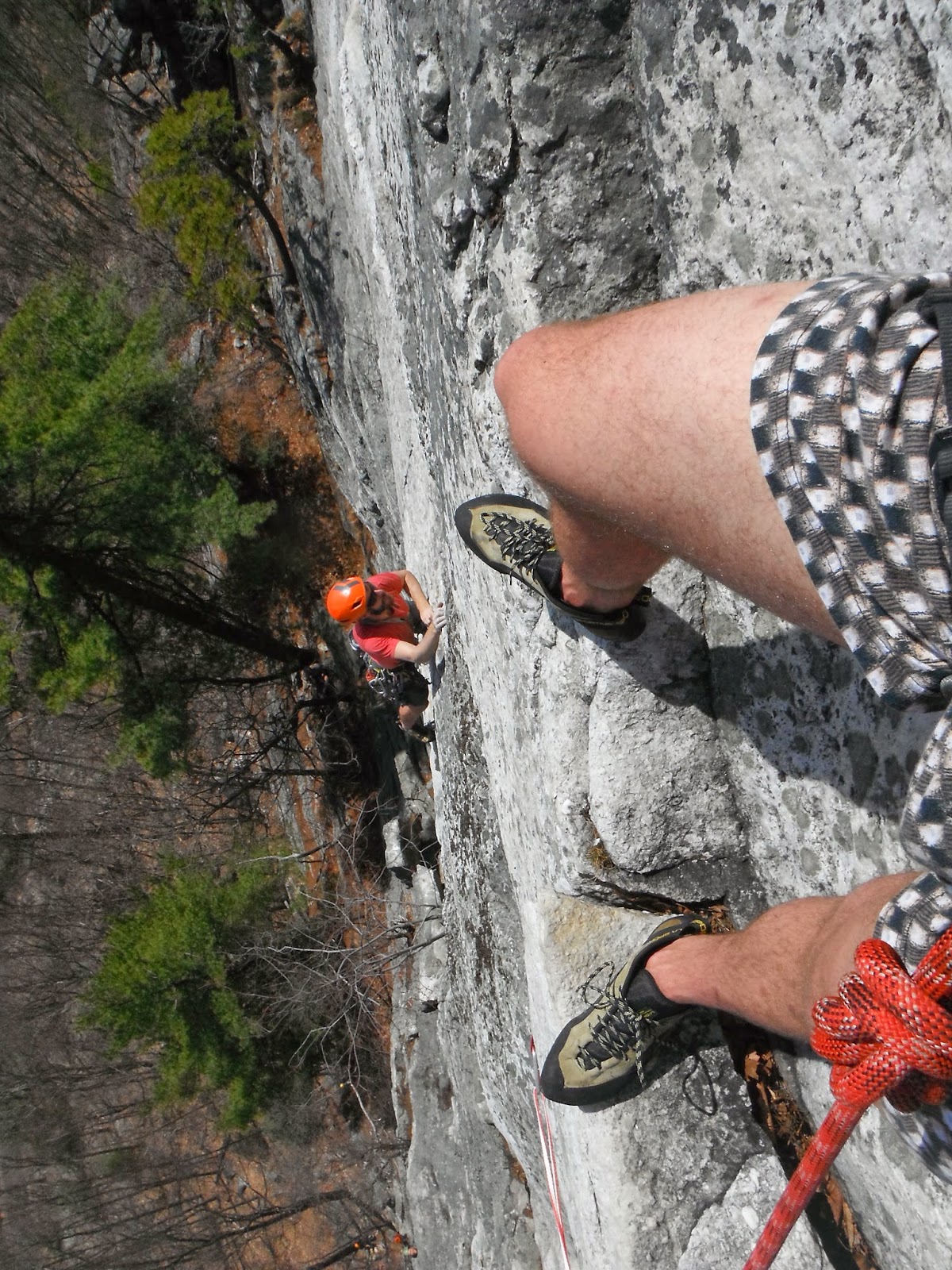 On this hot April day, jeans were a bad decision...and were promptly vetoed 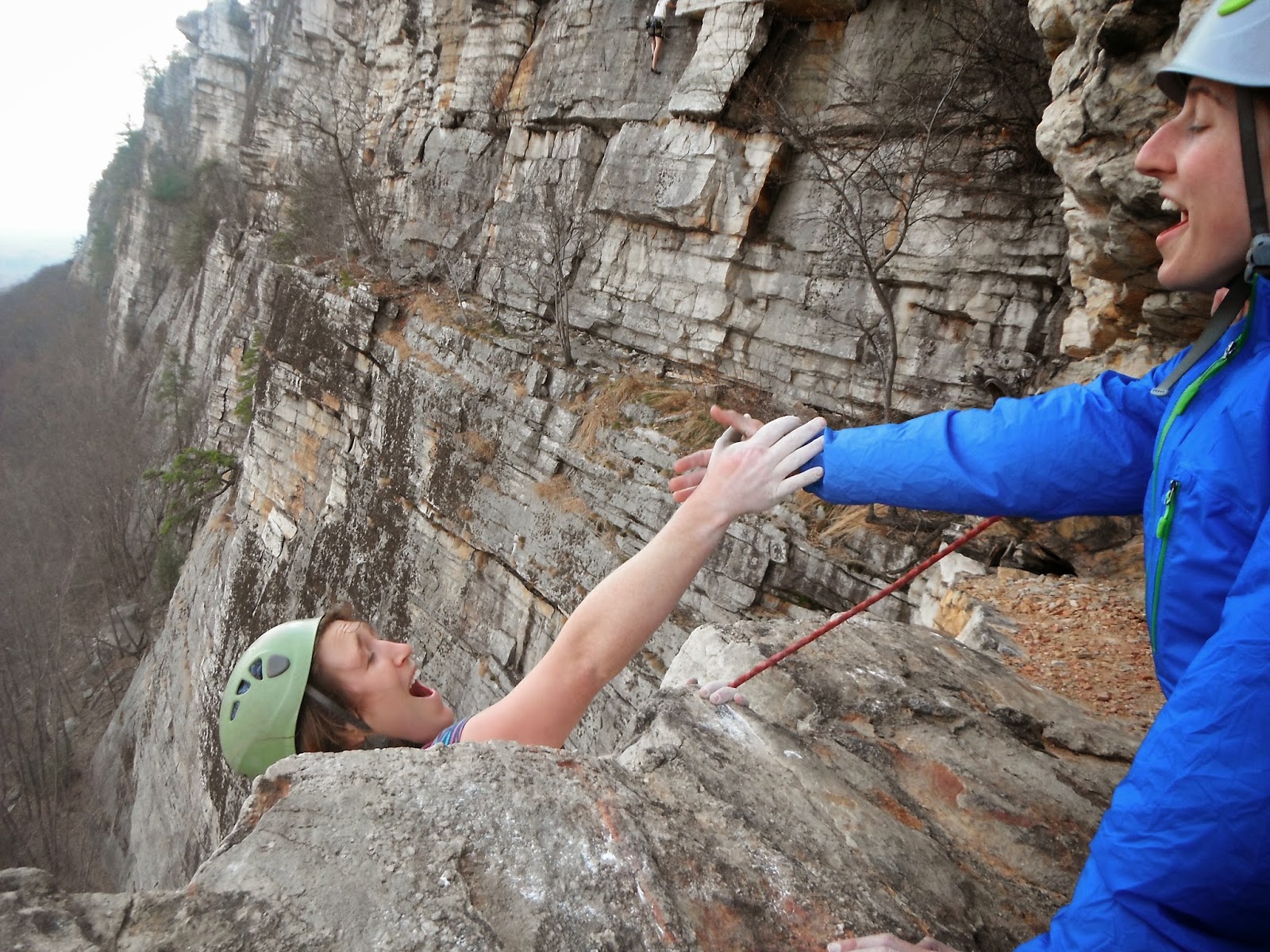 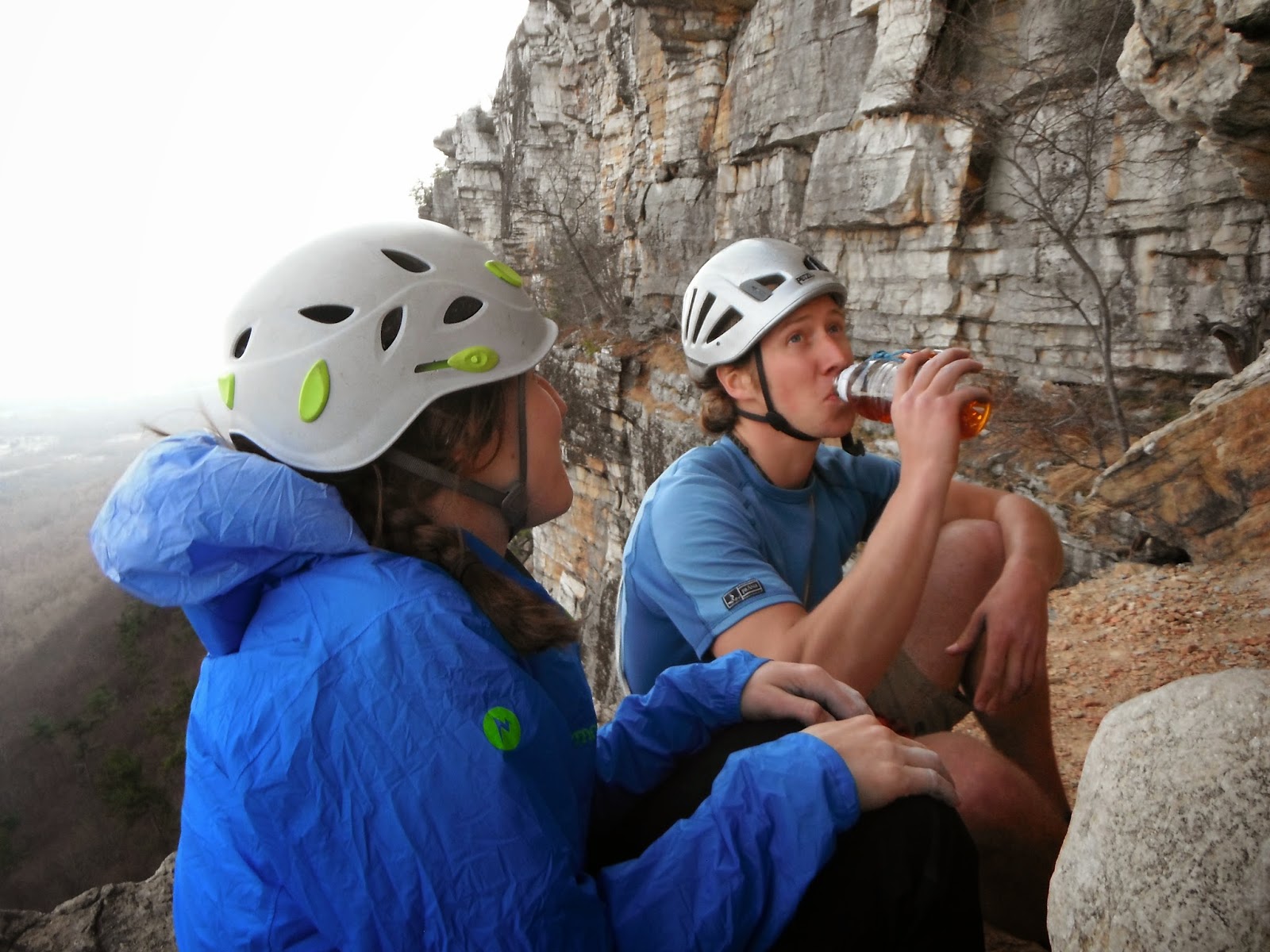 Enjoying a frosty beverage on the comfy ledge up High Exposure

Email ThisBlogThis!Share to TwitterShare to FacebookShare to Pinterest
Labels: Musings

Drew Thayer
We may merely be upright apes with awkward body-hair patterns and big, clever brains that tend to tie us up in worried knots, but look at the groovy stuff we can do on the loose in this wild world! Why not get psyched?